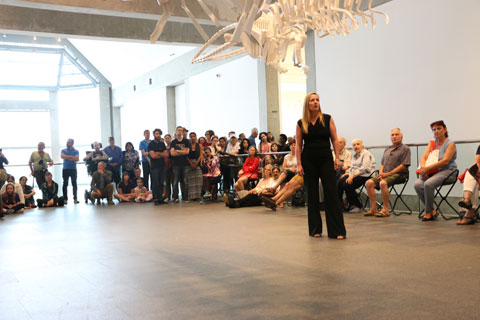 Ciara is a multidisciplinary artist. She is a trained theatre creator/performer, singer, musician, and educator. She studied Opera at Queen’s University (BA Mus) before moving to London, England to study at the Guildhall School of Music and Drama (BA Acting).  Ciara then worked in the UK from 1999-2002, where she toured a production of a John Adams’ opera and spent a year as a member of The Royal National Theatre ensemble in London. Returning home in 2002, Ciara soon joined the collective bluemouth inc. in 2003 as an associate artist, then a co-artistic director from 2009-2016 creating, producing and touring original shows internationally.  She is delighted to be working with bluemouth inc. again on a new original work, The Dinner Party, set to begin development in early 2020.  www.bluemouthinc.com  Ciara has also worked extensively with Theatre Gargantua and Fides Krucker, and she recently performed with Peggy Baker Dance Projects.

In 2018, Ciara formed Saintfield Productions with partner Ali Jafri.  The duo performs regularly as Saintfield, and they are creating an original electro-operatic new media performance entitled aRe yoU Experienced which has been supported by the Ontario Arts Council.  Saintfield debuted in August 2018, at The Rivoli, then in the same month created and performed an original score for the Summerworks production, Katimajuit with Inuit Throat singing duo, The Sila Singers, directed by Maziar Ghaderi.  The piece received an honourable mention for the Buddies in Badtimes vanguard award for risk/innovation. This was swiftly followed by a successful show at The Toronto Media Arts Centre (TMAC) opening for Ruby in September 2018. Saintfield headlined at The Painted Lady in May 2019 and recently performed at the FIVARS (Festival of Virtual and Augmented Reality Stories) in Toronto at TMAC in September 2019.  Saintfield Productions will debut their first version of aRe yoU Experienced at TMAC on Dec. 7th 2019, and plans to release their debut EP in early 2020. www.saintfield.ca  As a solo musician, Ciara has released two albums, Live at Le Select Bistro and Last of the Bohemians.

As an educator, Ciara leads workshops in school and universities, including facilitating The Poetry Project in 2018 with Richard Lee and Laird MacDonald for Humber College’s Performing Arts Program.  A past mentor artist educator at the Royal Conservatory of Music from 2007-2016, she write and ran the Virtual Rock Camp for many years, and has written and delivered hundreds of artist education and performing arts workshops in media arts, music, and drama.  She continues to facilitate with Kick Start Arts!, and is the project manager and a facilitator for a new project called The Creative Studio Lab launching in January 2020.

Ciara operates a home studio in Toronto where she teaches private voice. She is currently working with her mentor and collaborator, Fides Krucker developing a two-year teacher training program for voice, based on Krucker’s soon to be published book, Good Girls Don’t Sing.

In his past 19 seasons at Stratford, Edward has served as Assistant Director of Oklahoma!, A Delicate Balance, Oliver!, Ghosts, The Lark, Quiet in the Land, The Count of Monte Cristo, and Associate Director of King Henry VIII, The Donnellys: Sticks & Stones, and West Side Story. Other directing credits include Fuente Ovajuna, Voces des las Cerras, Vivir Para Contarla; Teatro EsArtes El Salvador. Noye’s Fludde (CBC); Dance of Death; Weird Kid; Nightlight; Sometimes…; and Nunsense, Baby, Six for Song, Little Shop of Horrors, On Golden Pond and On the Fourth (SummerStage Theatre, Boulder, Colorado). If I Could, and Two Minutes to Midnight; Teatro Es Artes and The World Festival of Children’s Theatre. Edward co-created landmark multi-disciplined adaptations of A Midsummer Night’s Dream in Mozambique with Shakespeare Link Canada and Montes Numuli and Romeo and Juliet, a hearing/deaf multilingual experiment, with Shakespeare Link Canada. He continues to work with artists in El Salvador in partnership with The Stratford Festival and CUSO International. Edward has taught acting at the University of Guelph and the National Theatre School of Canada and has taught Classical Theatre for Humber College, George Brown College, The Centre for Indigenous Theatre, Cawthra Park School for the Arts and the National Ballet School of Canada. For Michigan State University, Edward has taught classical theatre and theatre for young audiences and directed The Beaux Stratagem, Cyrano de Bergerac and James and the Giant Peach. His production company, In the Blink, produces youth-oriented theatre in the Toronto area and he regularly voiced characters for the TVO/Treehouse series Mighty Machines.  Edward is a BFA acting graduate of the University of Windsor.

Thomas Olajide is a Dora Mavor Moore Award-nominated, Toronto-based actor from Vancouver, British Columbia and a graduate of the National Theatre School of Canada. Some of his film credits include Inhuman Condition (Nominated for Best Original Program or Series Produced for Digital Media – Fiction in the 2017 Canadian Screen Awards), Mariner (Part of the 2016 Toronto International Film Festival’s Canada’s Top Ten), and Designated Survivor (Netflix) Some theatre credits include: Black Boys (Saga Collectif and Buddies in Bad Times Theatre); Love’s Labour’s Lost, Hamlet, The Taming of the Shrew, King Lear, A Midsummer Night’s Dream and The Beaux Stratagem (Stratford Festival); Macbeth, Taming of the Shrew and The Winter’s Tale (Canadian Stage); and The Whipping Man and Ruined (Obsidian Theatre). In 2014, he received the Stratford Festival’s Peter Donaldson Award for Great Promise in Shakespeare and the Classics. Thomas is a recent graduate of the Canadian Film Centre’s CBC Actors Conservatory. He can next be seen in the feature film ‘White Lie’ which recently had its world premiere screening at this year’s TIFF.

Sheena is a theatre/film director/producer, photographer and passionate artist- educator. Recently, she has directed numerous documentaries focused on arts advocacy, and directed/produced the one-man show Lizardboy – which toured nationally, receiving the Audience Choice Award at the Summerworks Festival. Her collaborative digital story-telling project Stories from the Inner City, has received international distribution. Currently her focus is as the Artistic Director/Founder of Kick Start Arts – a not-for-profit that facilitates projects in both school and community settings – engaging diverse communities in creation, thought, and collaboration. A central initiative of KSA is the innovative Regent Park Project. This community-engaged process sees professional artists working collaboratively with emerging artists – supporting the telling of their stories with integrity and connectedness. The goal of the project is to share stories not often heard in the main stream, and to offer access to the professional film world. This has been highly successful, with Sheena Directing and Producing both Season 1 and 2 of the resulting web series. (www.RegentParkProject.com) Sheena has worked extensively in diverse settings locally, nationally and internationally for over 20 years. She pioneered the Artist-Education Certification Program for the Royal Conservatory – acting as the founding Course Director. She has worked as both a drama and pedagogy facilitator at OISE/UofT, training hundreds of local and international teachers, always focusing on the power of the arts to explore issues of social justice. She is passionate about the arts as a powerful tool that creates community, engages participants, and establishes equitable environments, encouraging critical thinking, debate, and creative freedom.

Sheena was a finalist for the 2017 Toronto Arts Council’s Diversity Award.